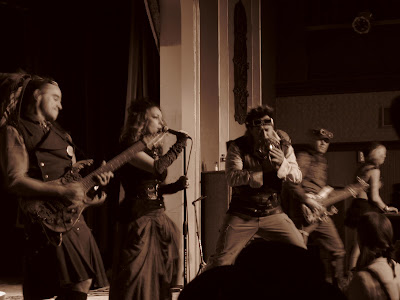 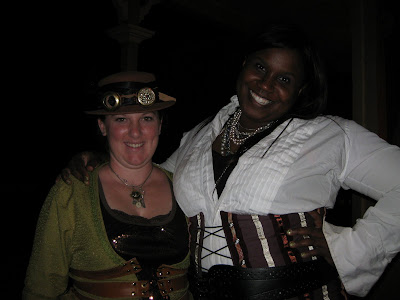 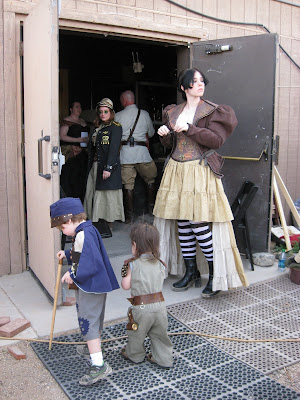 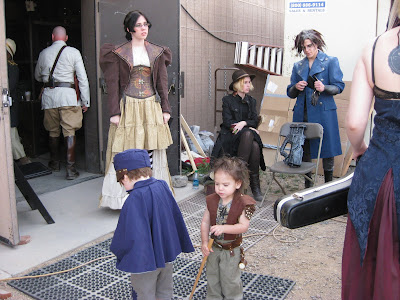 Fashion Show & Abney Park... There is no better day.

I woke up this morning and hit the ground running! I had to finish sewing a few items for the fashion show and get breakfast, lunch, kids and hubby all taken care of as well. I was told to be at the Saloon by 2:00pm to get ready for the show at 3. I lugged all the costumes, stroller and boys to the back stage and began the dressing phase. I had such anxiety that they would freeze or have a fit on stage. But I had nothing to worry about. We were 3rd to go on and I took my boys by the hand and lead them out with their first Steampunk outfits on. After we got a bunch of "awws" we exited and began a quick costume change. I put Sebastian in a little Steampunk vest pants and Maurice in his warrior outfit. Just before we came on stage the second time I told Maurice to yell "rah" and throw his fist up in the air. He refused to hold my hand that second time out. He ran right to the front of the stage and yelled "rah". The audience loved him. After a few more "rahs" and a turn around the stage we walked with everyone for the big lineup.

After the Fashion Show we hung out at our booth and talked to some really fun people. We made an appointment with the photographer to take a tin-type of us first thing tomorrow morning! After closing up shop we headed out to grab a bite to eat and a quick change at the hotel room. Andrew decided to stay at the hotel with the crabby kids and I jumped at the chance to have a kid free evening with Abney Park. I had such a good time and made someones night! I had the extra ticked that Andrew was not using and gave it to a guy at the gate! He was thrilled!

After the interesting show, I stood in line to get Andrew an autograph from the band for his birthday. They all signed my WWWC Pass and wished Andrew a happy 31st Bday!

It was a really great day.
Posted by Autumn Steam at 10:53 PM

Promote Your Page Too

Scan and Find Me on the Web

Email me with any questions or custom orders: 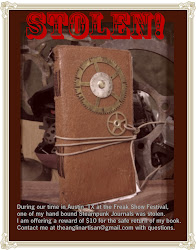